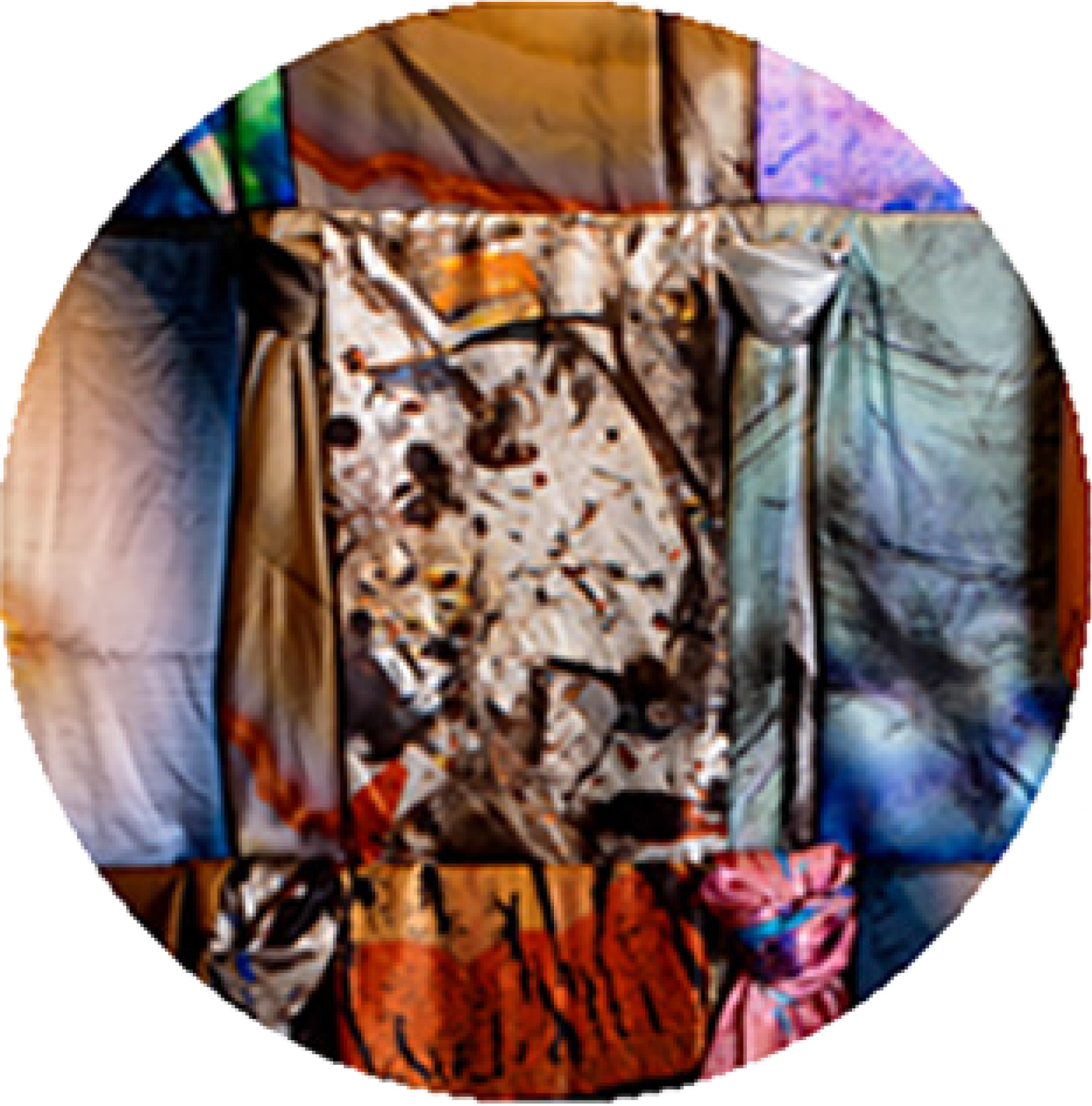 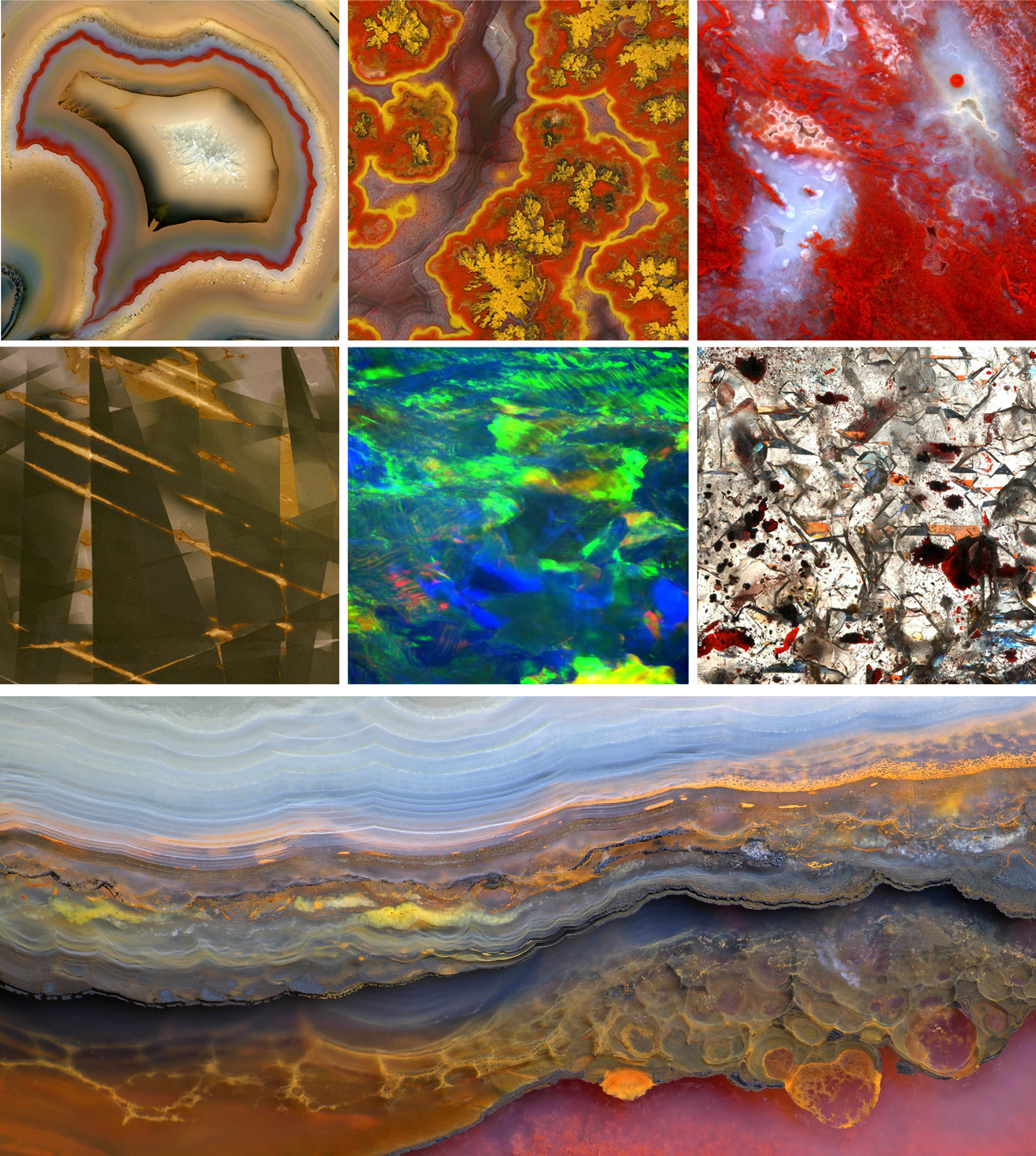 The appeal of these images captured from minerals was immediate. It was fascinating to explore how they formed, but I soon discovered that in many cases this was far from well understood. Many of the most beautiful images came from agates, and these, I was surprised to learn, are not ‘strictly’ minerals. The top row shows three of more than forty types, from the common banded agate to an intricate ‘red moss’ specimen. The causes of the beautiful colours were also ‘far from understood’. Richly coloured opals have no pigments at all, the drifts of green and blue seen here being created by the varying lengths of path taken by light. Many quartzes, the epitome of ‘crystal clear’, were made interesting by all kinds of ‘inclusions’: the elestial kind shown here (middle right) is rich in red from iron clinging to tiny particles of clay. I bought a powerful optical microscope, following my early retirement, and the complexities only grew: a few millimetres of an agate (bottom) might reveal something as rich as a landscape viewed from the air. 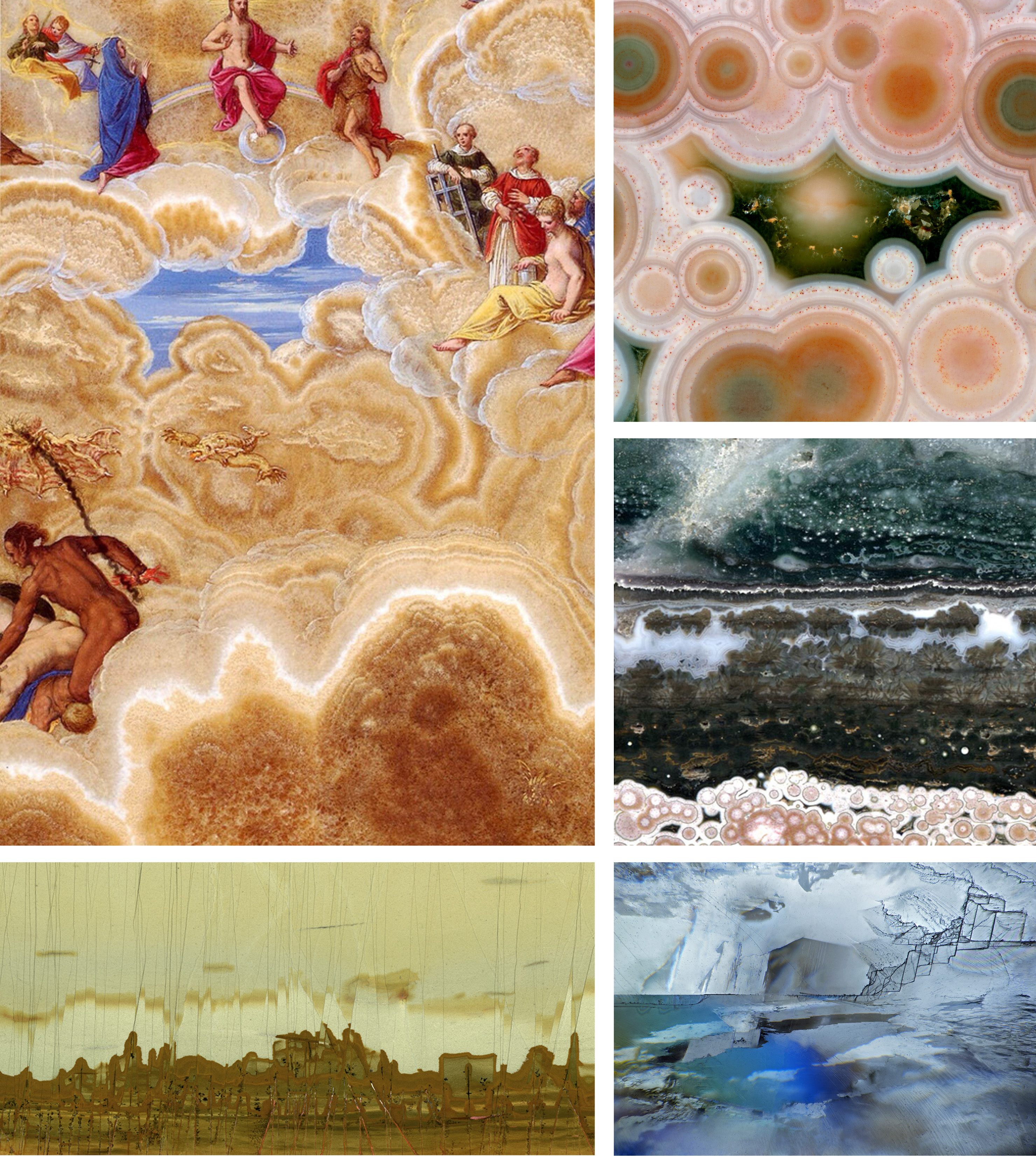 Images from minerals and stones also have an uncanny ability to evoke other things. The adjacent square image is from an orbicular jasper. It immediately suggested – no doubt being an architect helped – the vaults of a baroque church parting to reveal an image of the cosmos from the Hubble Space Telescope. I was later delighted to discover that similar imagery had struck a minor seventeethcentury artist, Pierre König, in a painting of the Last Judgement on agate. When I showed a neighbour a print of the second orbicular jasper, he spontaneouly declared, ‘everyone’s going to like these. You’ve got the cosmos at the top and cellular life at the bottom: it’s made like us.’ In the Renaissance, a favourite adornment of cabinets was paesina stone, which typically bears an uncanny resemblance to the landscape north of Florence in which it is found. To my surprise, one of the richest sources of landscapes and seascapes captured with the microscope are colourless, translucent calcite crystals. The sources of these images may not be ‘made like us’ in a literal sense, but I am convinced we feel a kinship with their vibrant matter in much the same way we do with nature and traditional art. 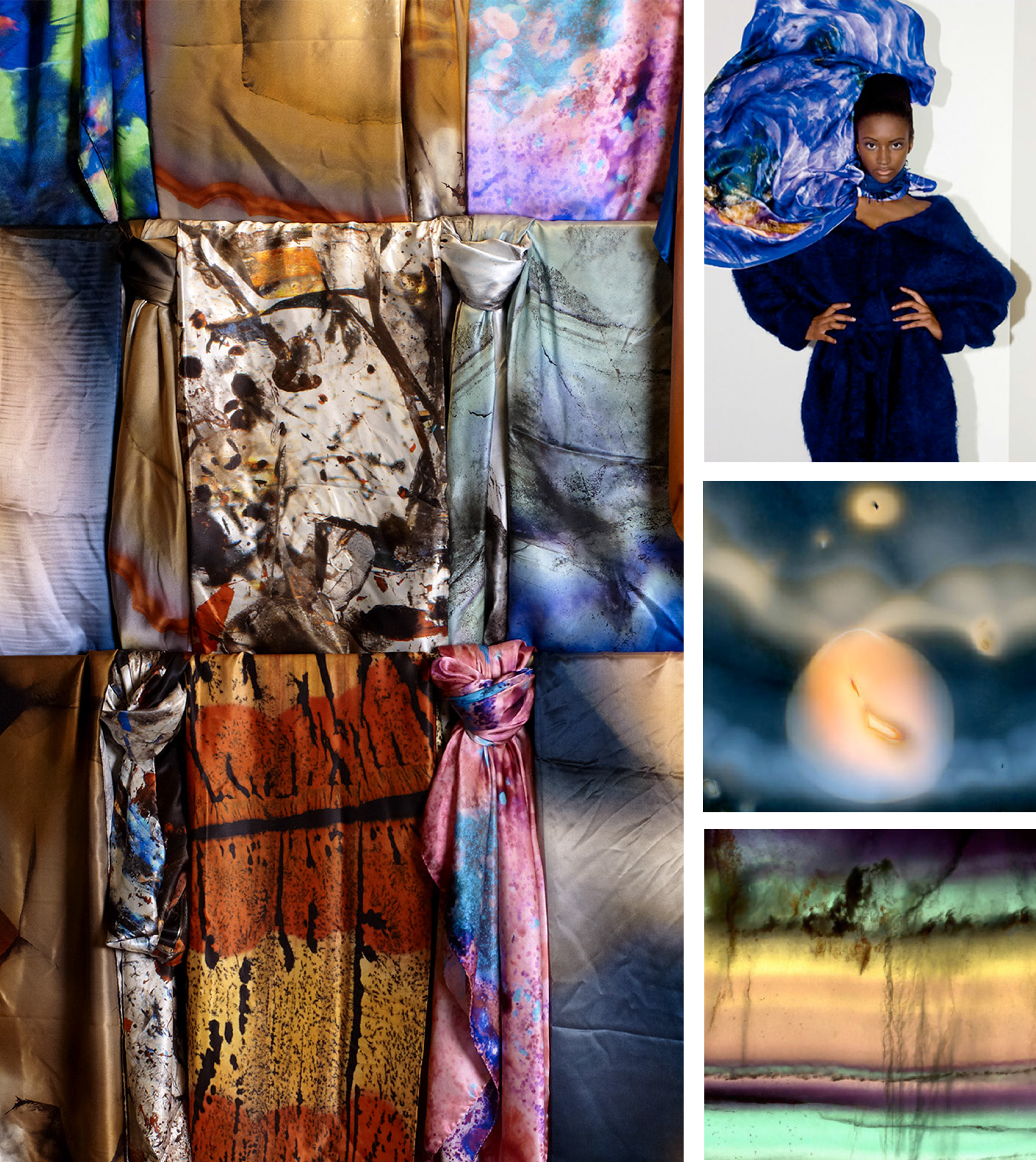 An obvious application for some of the images was scarves: they printed beautifully on silk satin. I wrote to Liberty, the world-home of the scarf, without success and then heard on the radio that their new American head buyer, Ed Burstell, planned to hold an ‘Open Call’ for products.

I attended in February 2010, he loved the scarves, and two weeks later I found myself being interviewed in my home by Theo Paphitis for a six-part BBC2 tv series ‘Britain’s Next Thing’, broadcast in spring 2011. The scarves found their way into other well known stores and boutiques, but the cost of digital printing ensured that they remained a ‘high end’ product with worryingly narrow profit margins for the producer. 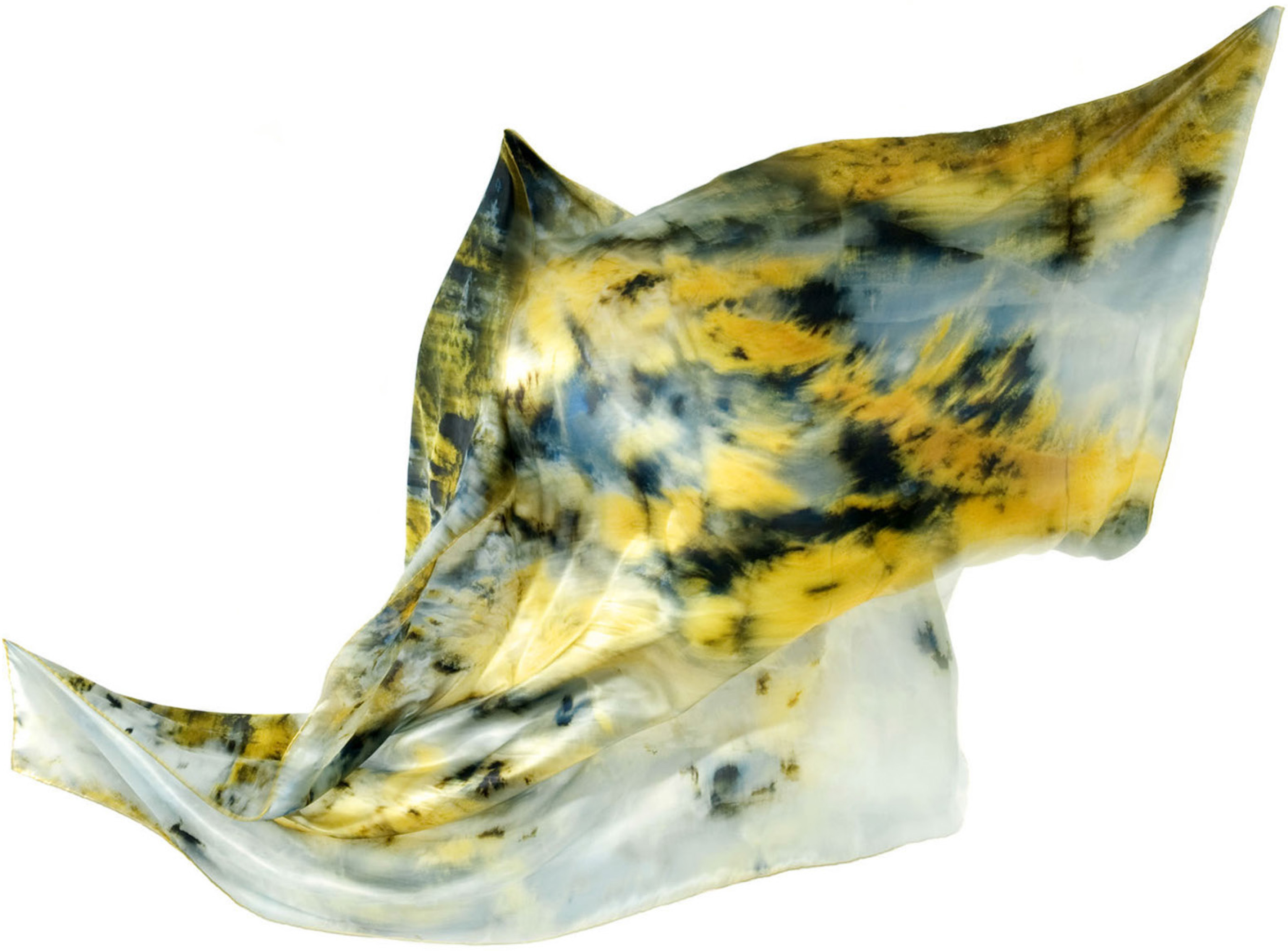 Scarves are difficult to photograph. The image above is from an exquisite Golden Plume Agate. Suspended on threads, it was an attempt to capture the lightness and fluidity of silk satin. The second, of a Montana Agate, was about kinship with wider nature. It reminds me of lichen, manifestly natural but not without a hint of something alien. 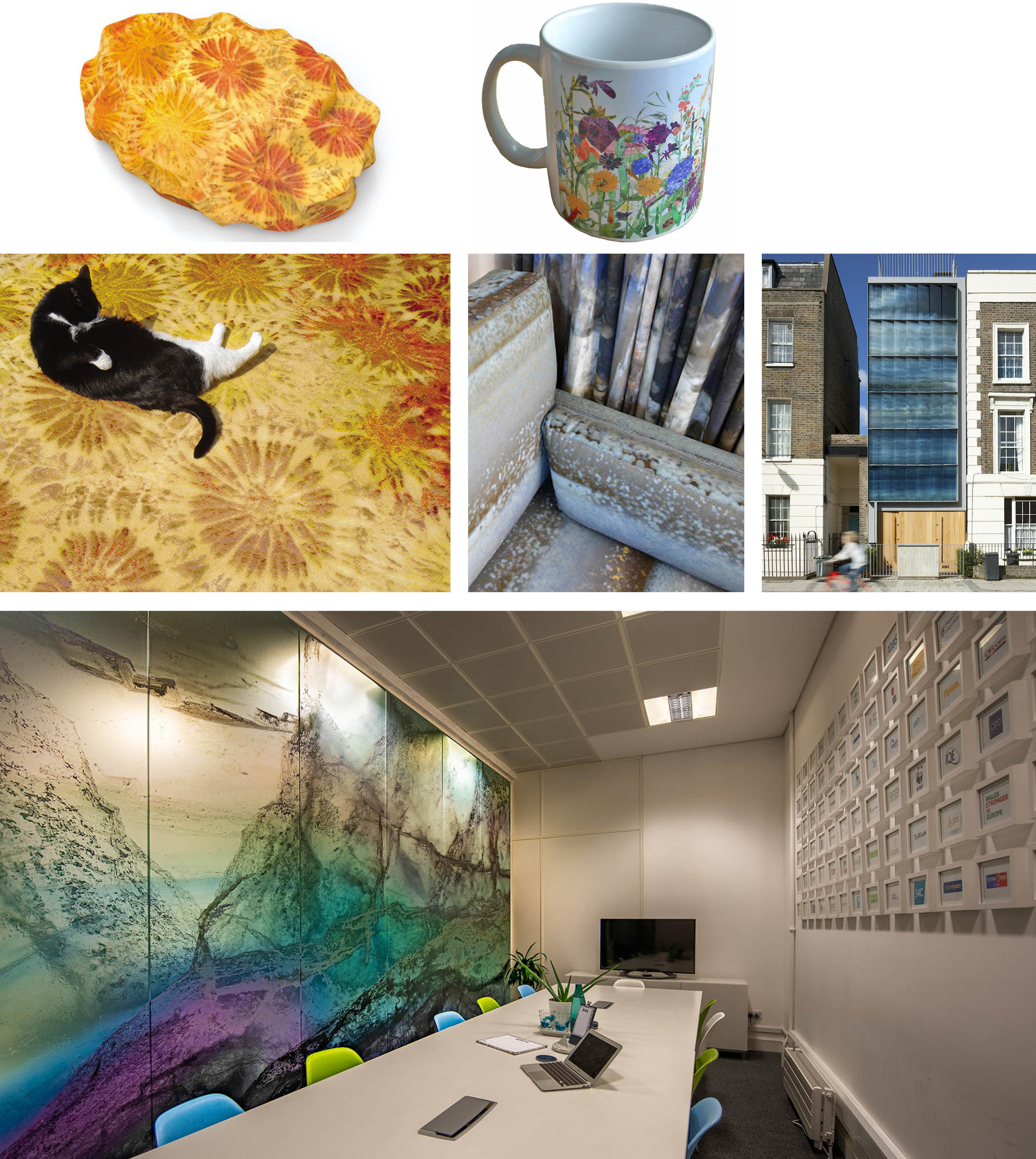 I photographed the rug with Molly not only because she would insist on sitting on rugs as soon as one appeared but also to emphasise that this was not a piece of digital trickery. The image used to control the digital loom was from a piece of fossil coral – and no, the ‘pebble’ above is not the source but a 3D CAD model wrapped with the same image as the rug.

As an unreconsructed ‘in the nature of materials’ modernist, I found this blurring of boundaries between ‘real’ materials and printed ones slightly disturbing: fine for an agate fabric on my sofa or for moonstone curtains, but I have to admit to being slightly surprised as well as delighted when my architect-friends Pankaj Patel and Andrew Taylor, who run a distinguished practice in London, decided to laminate an image from a level-bedded agate, printed onto a translucent organza silk, into an array of glass louvres on a house in Camden. Back in 2011 glass could not be durably printed digitally, but it can now: this glazed screen in an office in Cardiff Bay, by Ongl Design, feels to me like a perfect match of image to medium.