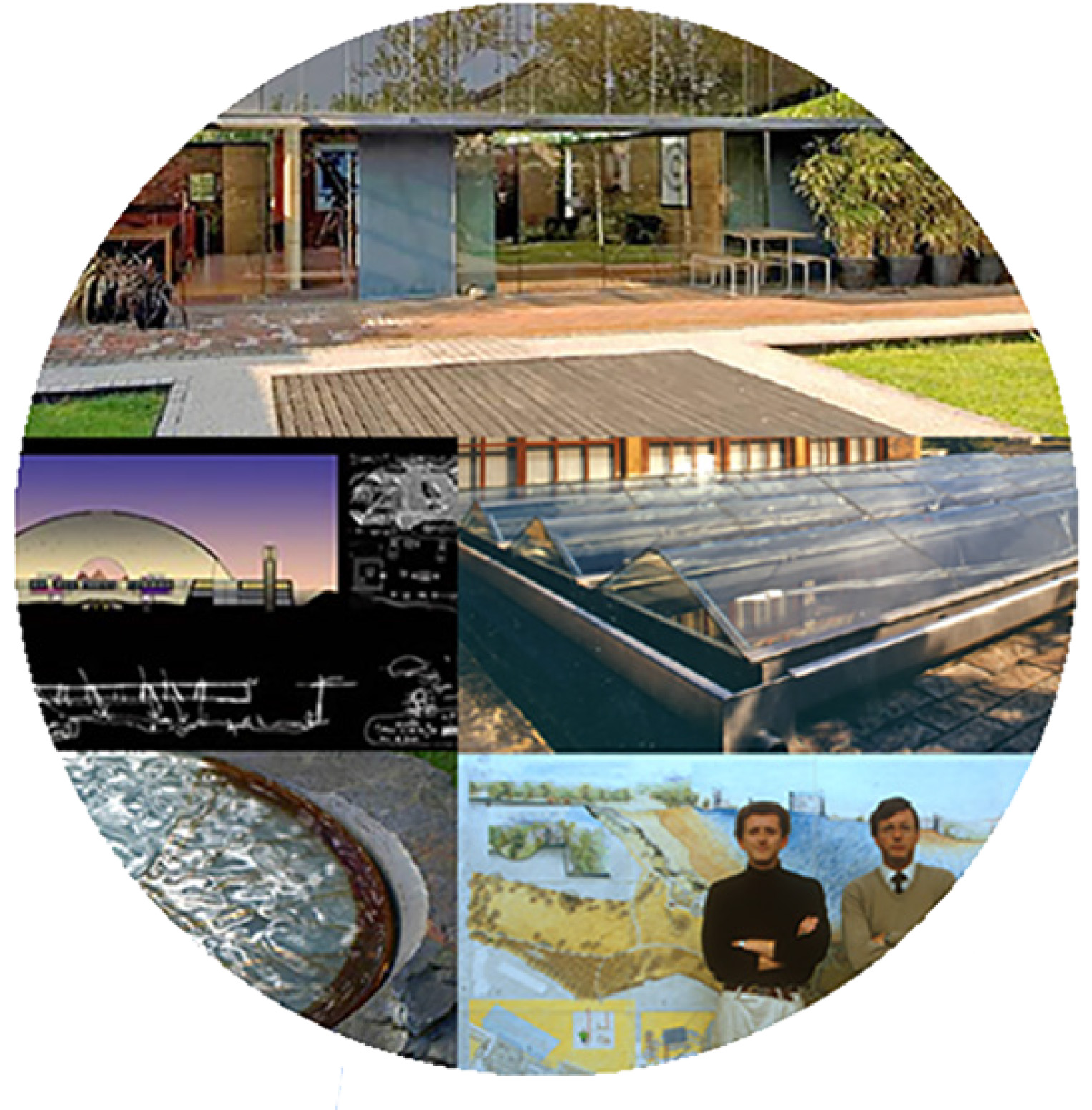 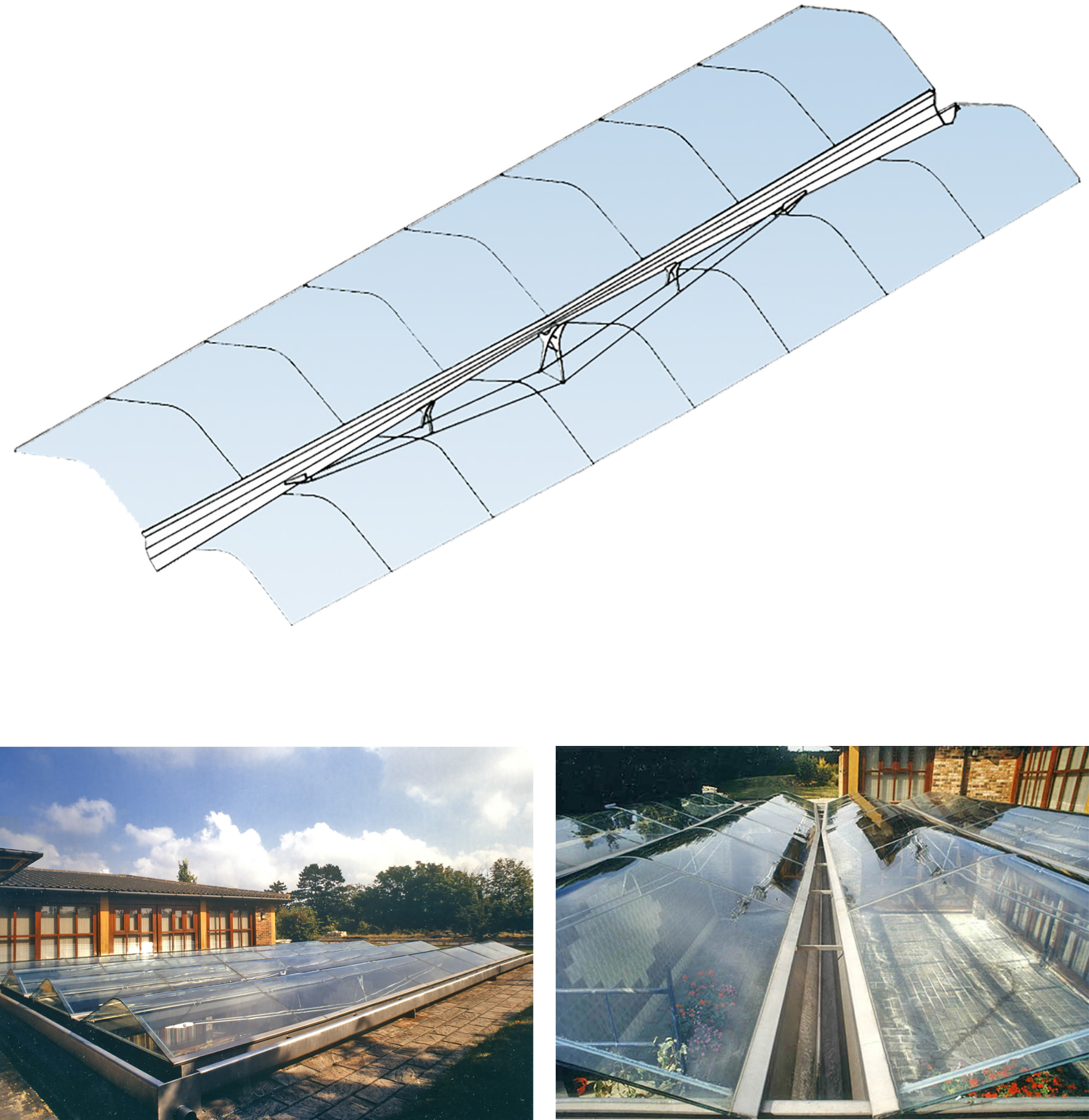 Designed to cover the sunken courtyard of a house built in a redundant water tank on a cliff-top east of Portsmouth, this roof began my fascination with glass and introduced me to a brilliant engineer, Mark Lovell. The house’s living room and indoor swimming pool framed the courtyard, but it attracted a lot of wind-blown leaves and litter, and on sunny days became uncomfortably hot due to heat build-up in the floor. The client’s brief was refreshing and all too rare in the world of architecture: do me something that hasn’t been done before. The basic idea came quickly: ‘waves’ of glass arches spanning between ‘guttertrusses’. The vital refinement occurred to me on a flight to a conference in the US. I recalled crossing the Great Divide between the Atlantic and Pacific watersheds and realised this could apply to the roof: at their centre the gutters need minimal depth and width, while at their ends, where the water builds up and shear forces have to be accommodated, they need to be much larger. Visually this looks wonderfully taut and plays games with perspective. Thermally, the laminating films for the arches reduce UV light, and convection currents ensure that most of the hot air gathered well above head height. 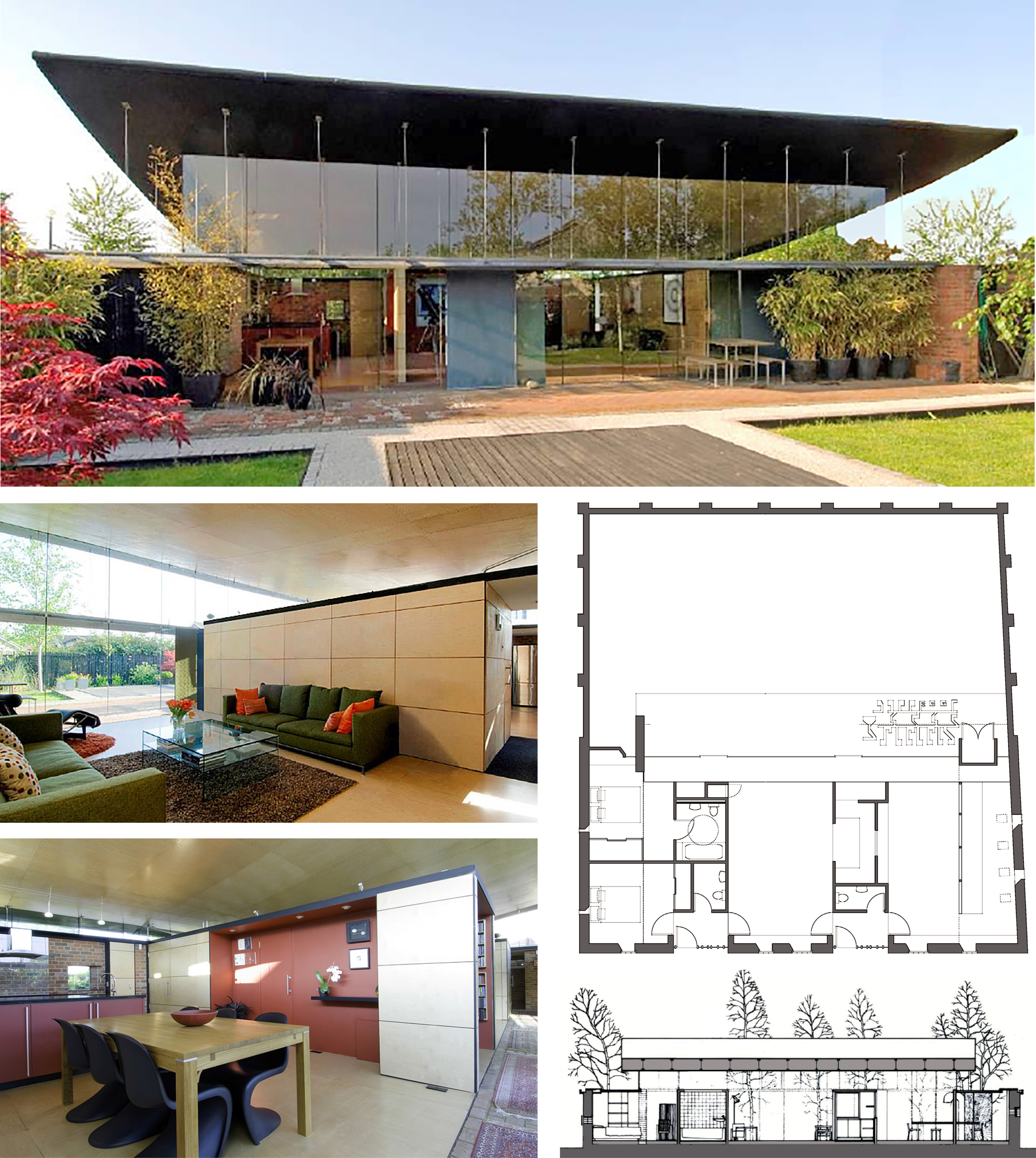 Built in FutureWorld in MiltonKeynes, Radiant House was another venture with Mark Lovell. It took the loadbearing capabilities of glass to extreme lengths: a 5.5 tonne plywood roof floated on 15mm thick toughened glass. To the north this was a narrow clerestorey, but to the south it was 3.6m high, stabilised at doorhead-height by being bolted to a steel ‘louvre-girder’ hung from the roof. Lateral movements of the whole structure were prevented by pairs of small triangular stainless steel frames, bolted to the ceilings of the service cores and transmitting any loads into reinforced concrete frames hidden behind the plywood panelling. The house was intended for my own use: I had been offered a post at a new school of architecture nearby. The plan accommodated a living-dining space, galley kitchen, master and guest bedrooms, and a design studio. Shortly after construction began the school was closed: I had no option but to sell. To the surprise of many, it was snapped up by a couple who had spent five years modernising an Edwardian house. They were intrigued by a photo in an estate agent’s window and on seeing the roof floating above the garden walls said it was ‘love at first sight’. 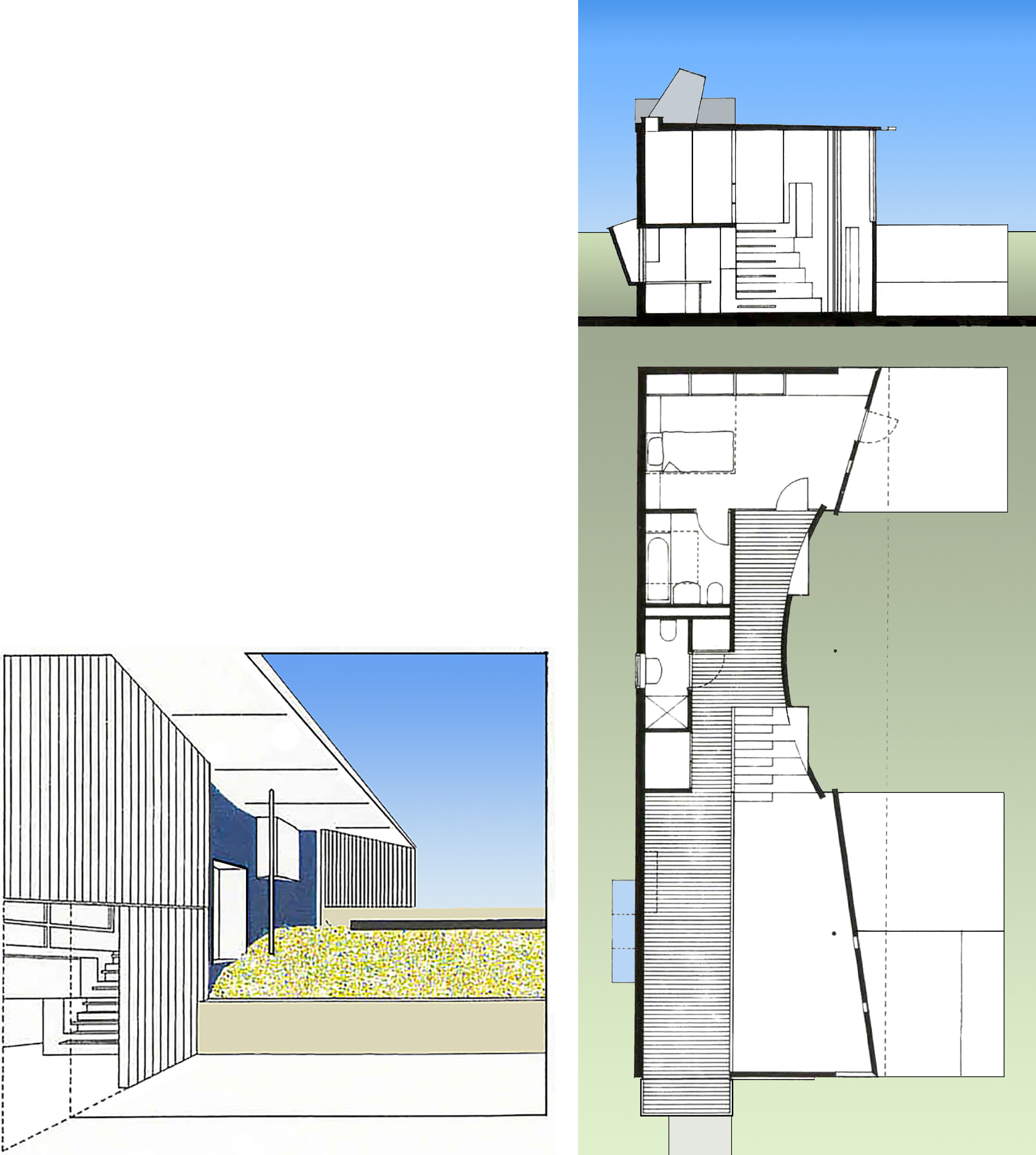 After buying a house in the Green Belt, adjacent to Whipsnade Zoo, a friend asked me to explore the possibility of building a small weekend house on the property. His needs were modest but not entirely conventional, displaying his small collection of Modernist glass and furniture being a prime component. I proposed a long, thin house that stepped up the west-facing slope. To the north it ran tight against an area of woodland, whereas to the south the plan was articulated to frame the garden and create multiple views down its length, making a small house seem large. From the living room, for example, you could glimpse the sky through a flipped-up section of roof over the bedroom. Glass pieces could be displayed on the doubled-up stairs and in tiny triangular ‘bay windows’ at different levels in the curved section of wall. Chairs were to be placed on the long gallery over the kitchen and dining area. This extended out to form a small balcony on which to enjoy evening sun on the ‘chair of the day’. The balcony also acted as a canopy to the entrance below – an allusion to Le Corbusier’s grand villa at Garches. Sadly, my friend decided to sell. 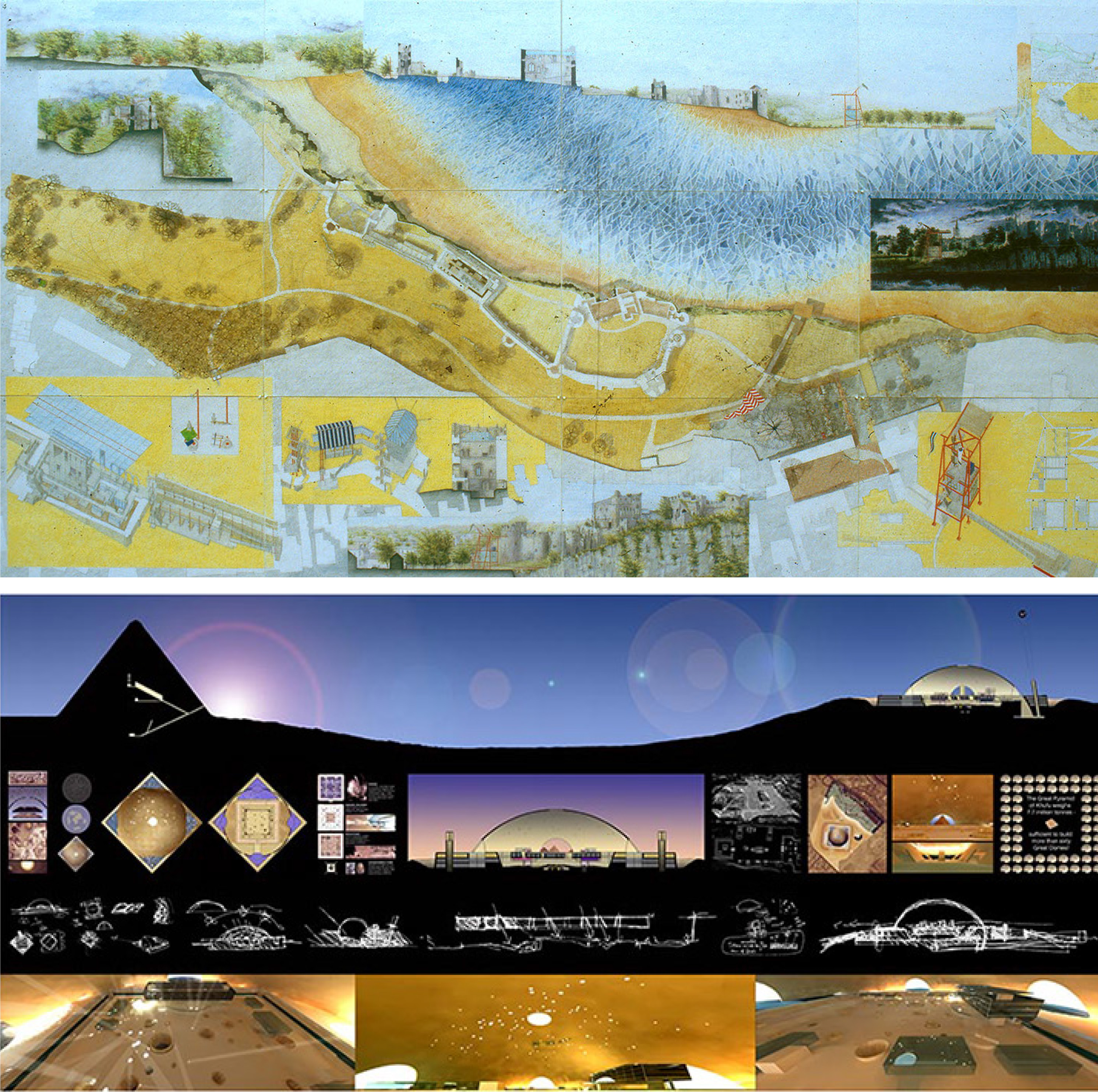 Competitions offer an opportunity to explore ambitious or innovative ideas. The first I entered, for Visitor Facilities at Chepstow Castle, was also my most successful, winning third prize. The proposals went way beyond the brief: the new facilities were housed in a steel and glass siege tower, and I suggested transforming the rambling castle beside the River Wye into a living community of makers’ studios and their work.
The Great Egyptian Museum near Cairo posed an altogether more formidable challenge. Inspired by the ancient fascination with stars, I proposed a 230 metre-wide dome – the size of the largest of the Giza pyramids a mile away. This was to be mapped with the positions of stars overhead, which became openings through which the sun could enter. The greatest concentration of ‘sunspots’ on the surface of the three strata of exhibiton spaces were then to be ‘carved by light’ to allow the sun to penetrate down to the buried reconstruction of Tutankhamun’s tomb. I was really happy with the ideas, and then disaster struck: the computer of the CAD-savvy student who was helping to render the project suffered a catastrophic hardware problem, leaving us with crude, rapidly rendered images. 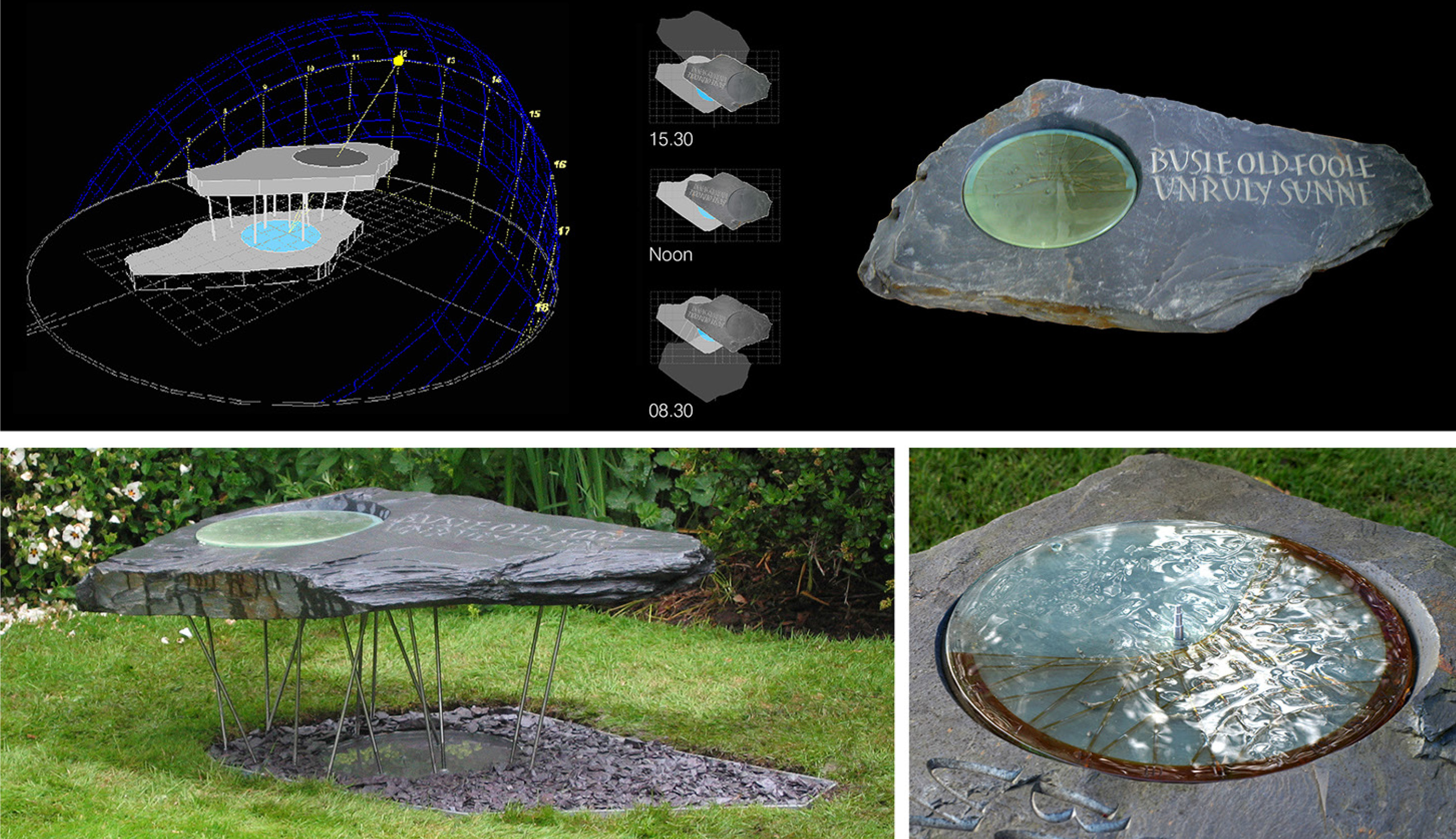 Shortly after the Egyptian competition I was asked to design a sundial to mark a 60th birthday. I decided to model it on a dolmen, with an irregular piece of slate supported by adjustable, pencilthin ‘dancing legs’. The base became the shadow of the slate at noon on the birthday, and in thinking about the ‘dial’ I recalled a photograph of a small glacial erratic stone holding water in a natural hollow. The dial became a disc of glass, its ‘shadow’ a tiny pool for birds and small mammals. The disc was made by fusing two layers of glass and not worrying about excluding dust – the surface irregularities transformed it into a vivid image of water.

The site for this house (rejected by the Planners as ‘backlands development’) was framed by two long, blank walls, with a narrow entrance and fine views over farmland to the north. Denied ‘normal’ windows, I developed the plan around a small courtyard, while the section featured two horizontal layers of roofs/ceilings. Circular rooflights were located where needed, and the shift between layers generated an everchanging ‘calligraphy of light’, illustrated at different times of day and year as a ‘Light Year’ – a poetic use of software normally used to predict ‘performance’. 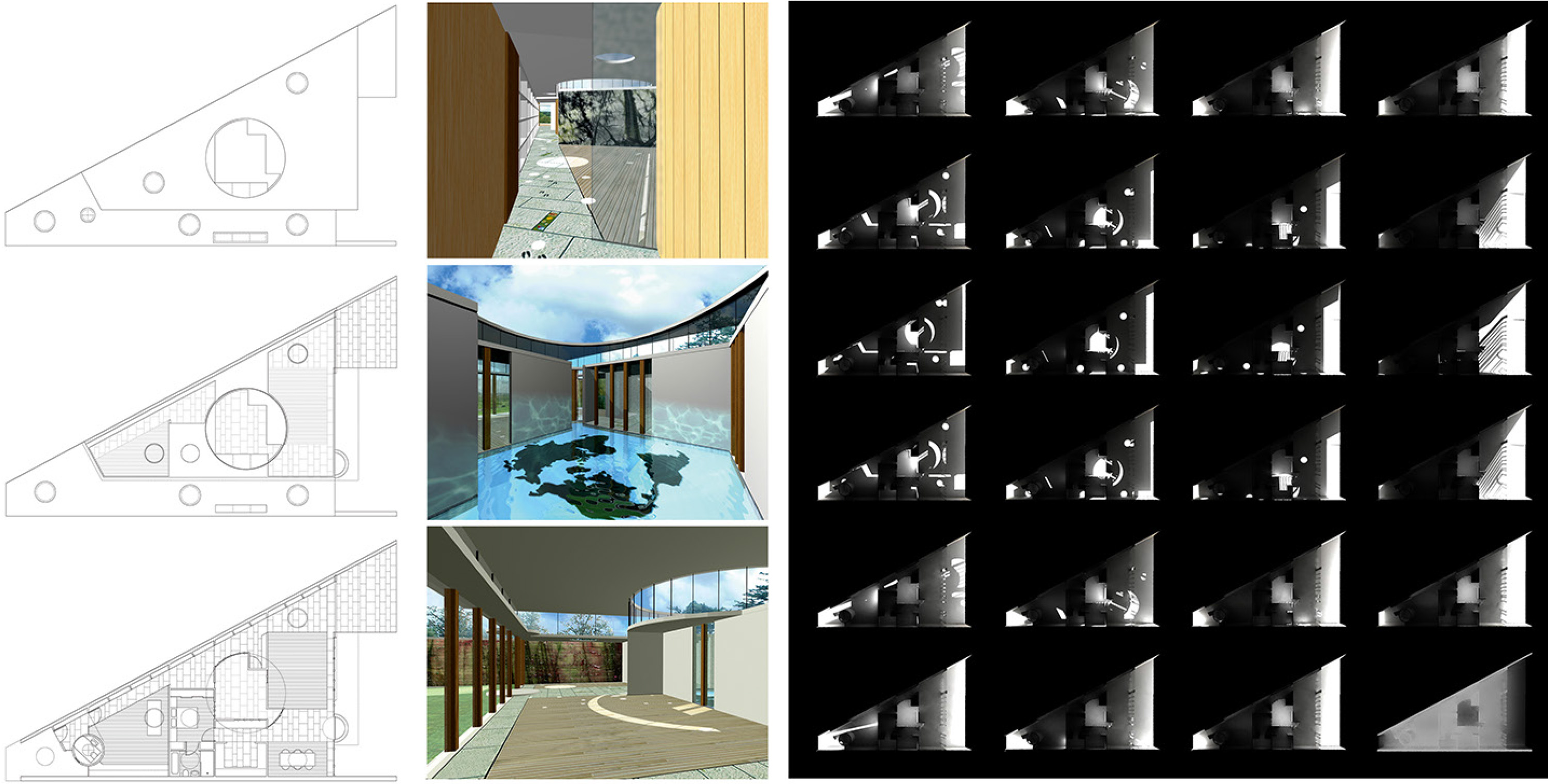 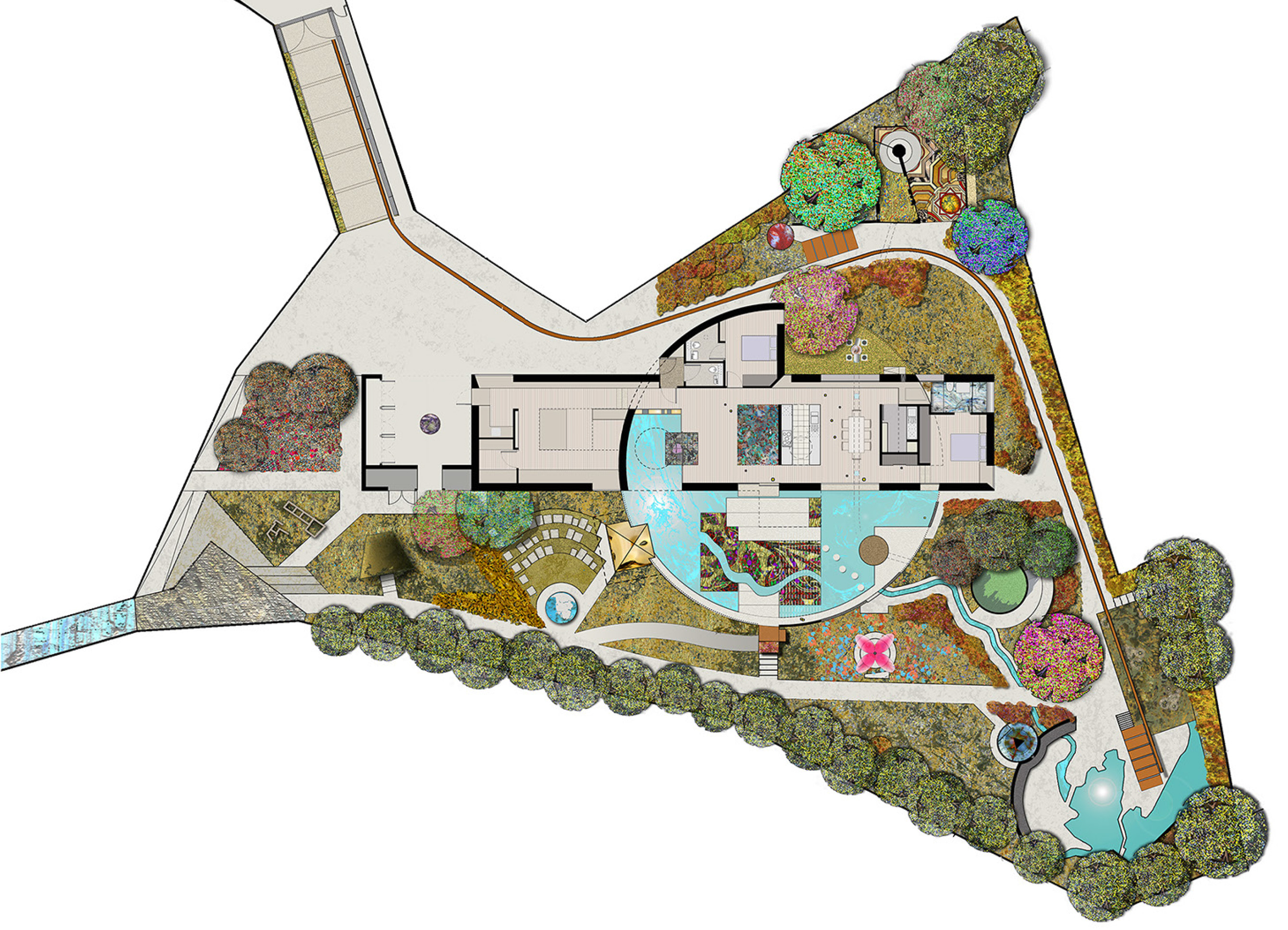 After the triangular house fell through, another odd plot nearby in Sully came on the market. It was embedded in a 1970s housing development and framed by brick garden walls. No one could recall what it was originally intended for and I decided to have some fun with it – and got rather carried away. Devoid of views, save for the sky, or of useful constraints, I tamed the irregularies with geometry: a circular raised terrace traversed by a rectilinear house. The ‘left-over’ land was envisaged as an occasional playground for children, scattered with fragments from previous projects, miniatures of historic elements of South Wales, and a ‘grotto’ made of rusting steel to celebrate my fascination with minerals.