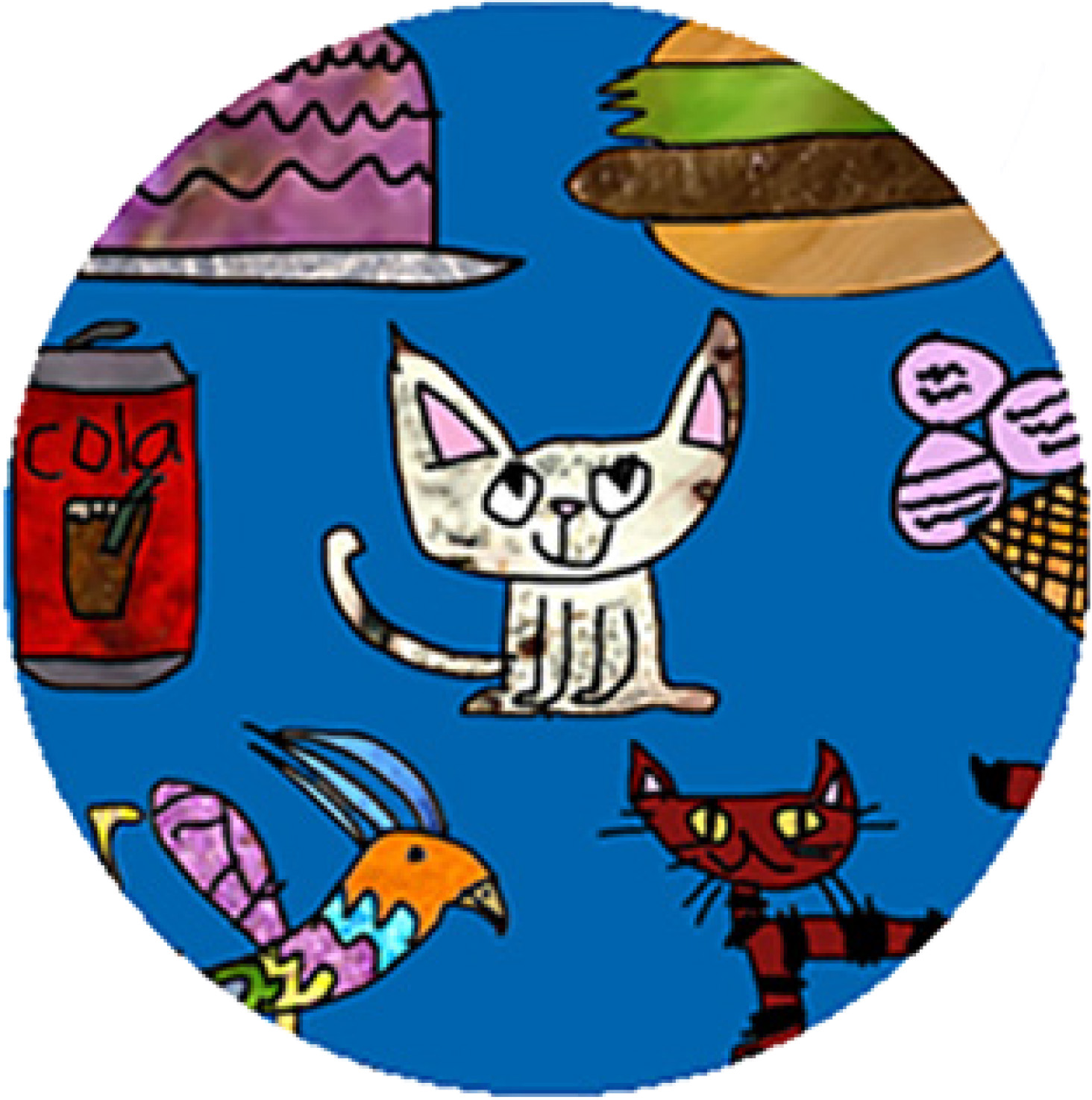 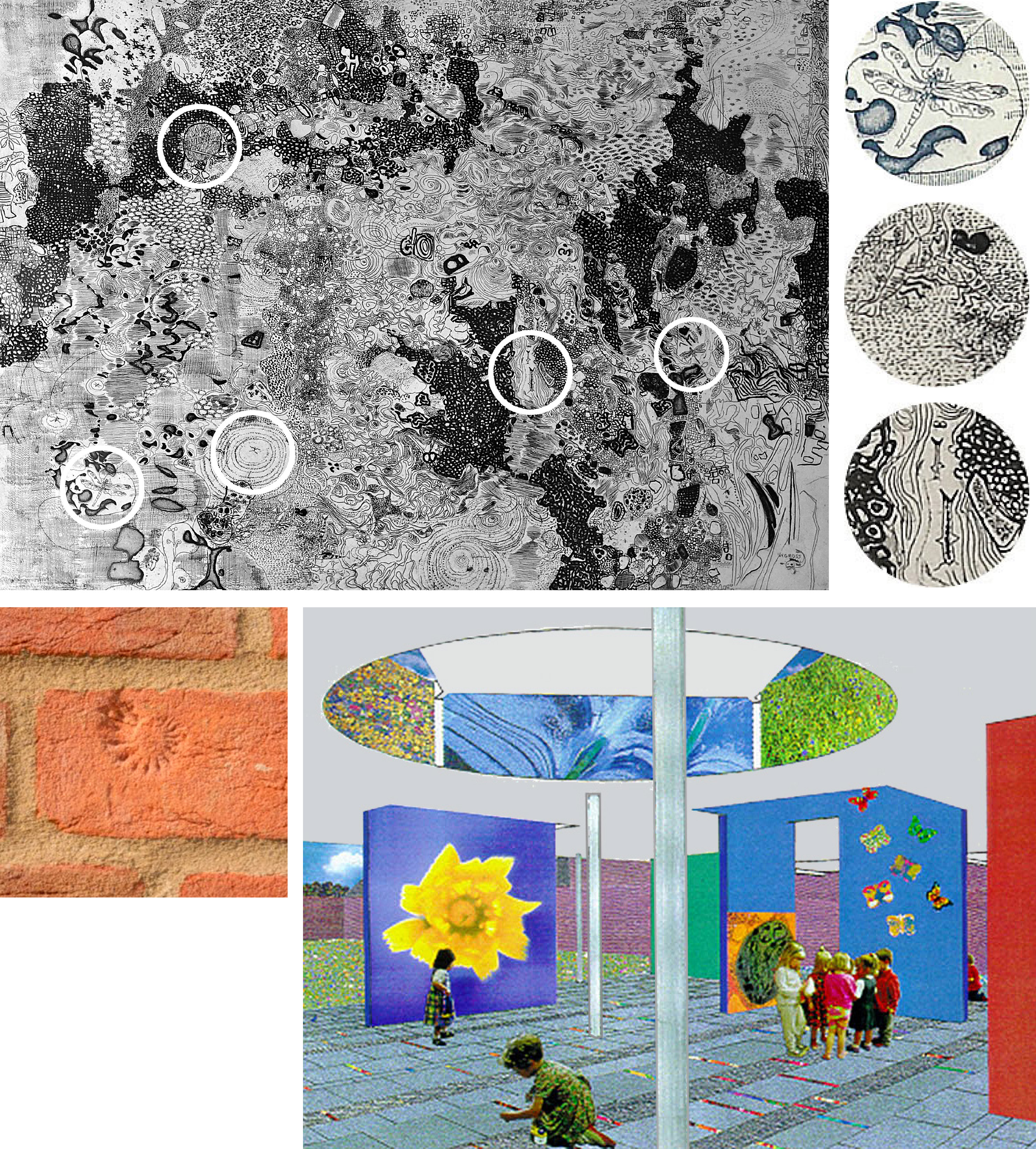 In 1992 I bought this etching by Anthony Gross. I was captivated by its ‘cosmic’ quality and, short of time, did not examine it closely in the gallery. Back at a friend’s house, his young daughters insisted on seeing it: ‘look at this dragonfly’ said one, ‘and here are tiny fishes’ noted her sister. Oblivious to the ‘abstract’ qualities that captivated me, they saw endless, fascinating details. This experience has touched many of the things I have done since. At Radiant House, for example, some of the hand-made bricks were impressed with ammonite fossils before firing – something to interest children while their parents ‘toured’ the house. In 1997, in a shortlisted entry for a competition to design a new National Wildflower Centre, I proposed a ‘Slate Meadow’ in response to their desire to have craft workshops for children as a major element of the facilities. England has lost 97% of its wildflower meadows since WWII and the idea – emulating church floors as sites of memorial – was that widened joints filled with blackstained wood strips would be gradually replace by colourful ‘flower tiles’ made by the children, creating an emblem of the Centre’s mission to encourage the planting of wildflowers as a ‘normal’ part of urban landscapes.

Following the success of the ‘mineral scarves’ in Liberty, I was struck by how few of the 3,000 images I had scanned were what I called ‘scarfable’. It occurred to me that the less designerly images might, however, serve as ‘digital paints’. To try this out I approached Albany Primary School, an inner-city school in Cardiff, and offered to run a workshop based on cats, with pictures of my beloved Molly as inspiration. The children made pencil outline drawings, which I then coloured and presented on a 15m-long scroll. Many of the cats were delightful, but one stood out. The drawing was elegant and economical, and blended with an image from a moss agate it seemed to me, a lifelong cat-lover, to capture the essence of the domestic cat. This image of Molly has that rare thing, genuine ‘character’, appearing by turns a mischievous know-all and loving friend. She captivated me immediately, and she captivates children: I didn’t know it then, but she later proved to be the catalyst for the Molly’s World app illustrated elsewhere. The head teacher in another school told me that children would take advice from Molly more readily than from teachers or parents: I realised she could become the centre of a creative and educational ‘world’.

This meadow image was the result of a workshop with children in Woodside Primary Academy in Walthamstow, undertaken with the help of a former student, Rebecca Pike, who was doing some architectural work for the school. The children drew by hand the flowers and ‘creatures’, using clinical vector-traced templates as a guide, and then coloured them on the school’s PC’s, using temporarily installed Photoshop Elements software. It provided all the confirmation I needed of the potential of offering this capability on an app. 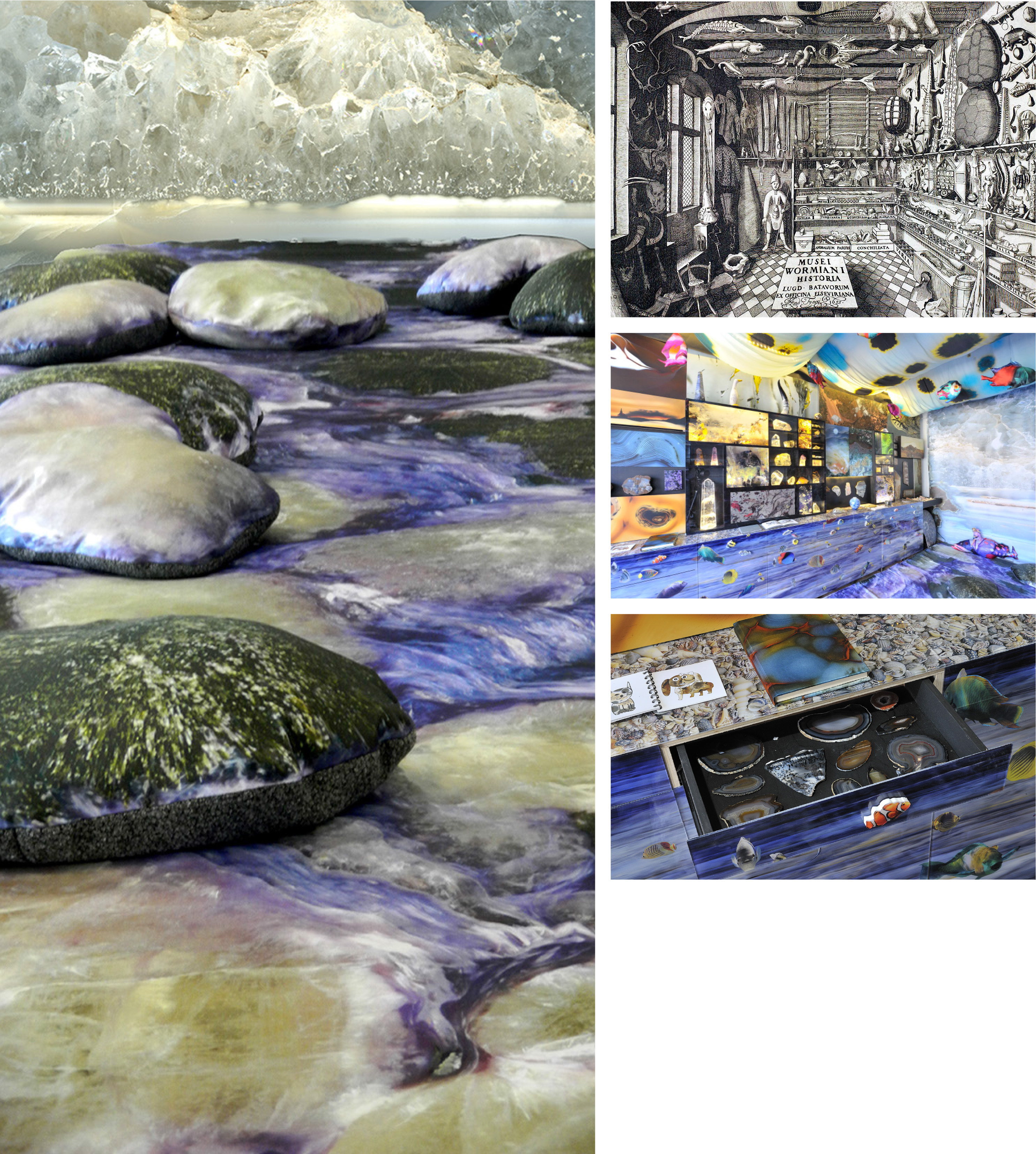 Cabinets of curiosities were forerunners of the museum. A typical example, like that of the Danish physician and professor Ole Worm (left), teemed with a heterogeneous collection of natural and man-made objects. They seemed a perfect model for a detail-rich exhibition for children, and I had the idea of making one that could fit in a standard shipping container. The container would be rented locally and the exhibits quickly mounted and demounted using powerful neodymium magnets. A test version was duly assembled on the car park adjacent to the Welsh School of Architecture, but sadly neither sponsorship nor a grant was forthcoming to send it ‘on tour’. It was, however, ‘tested’ by the class of cat-draughtsmen from Albany School. I was worried they might find being locked in a metal box unnerving and left the doors open. They immediately asked to have them closed: ‘it’s like a magic cave in here’ came the explanation. To add comfort and warmth I covered the floor with a ‘silk stream’ and ‘rock cushions’, printed with an image from a beautiful specimen of Russian charoite, a mineral only named in the 1970s. 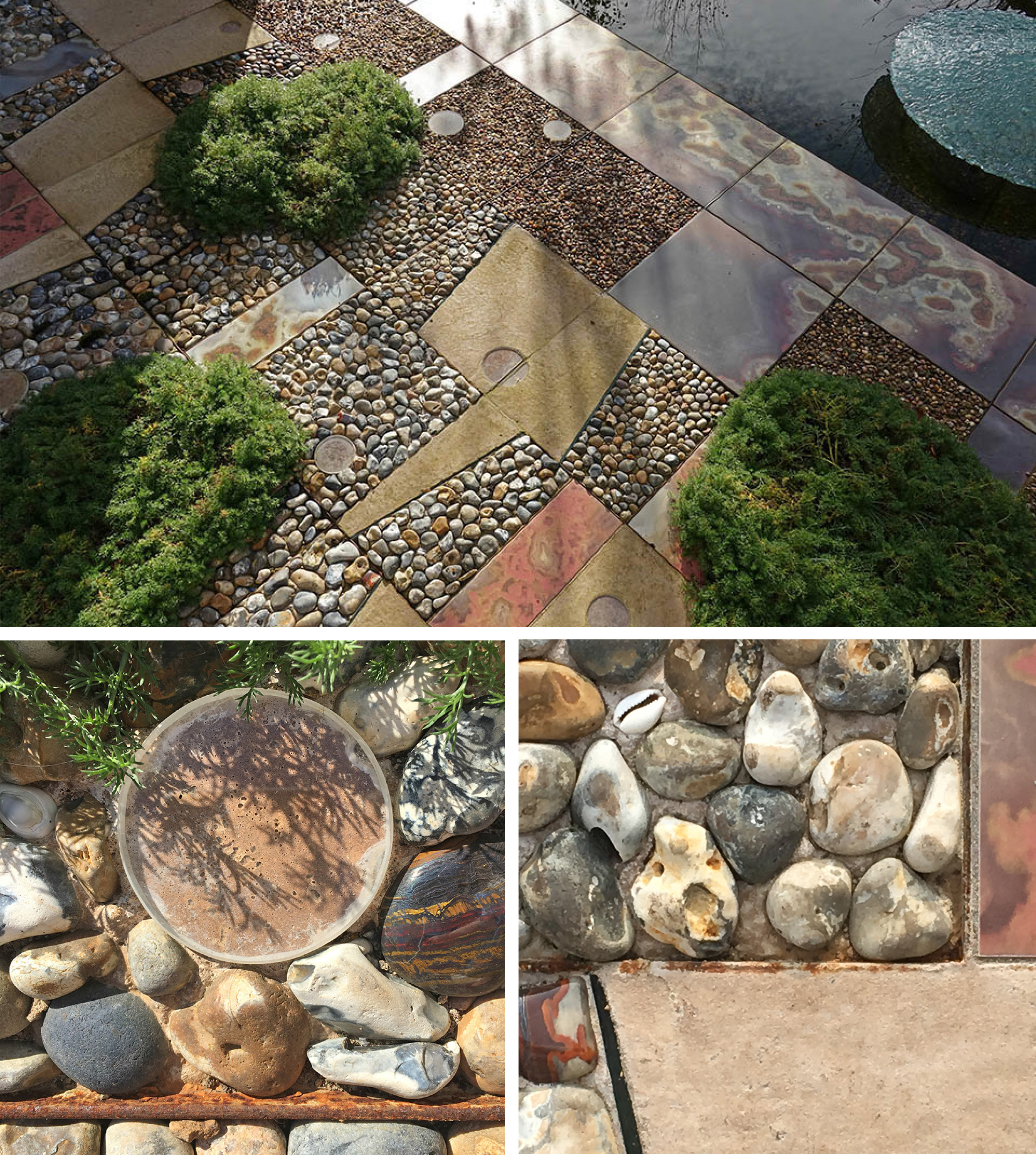 My front garden is described in the section on 'House and Garden'; here I illustrate briefly how the idea of an ‘animated floor’ that began with the ‘Slate Meadow’ continues to fascinate. The patio surface, a tapestry of diverse materials – pebbles, concrete, and printed tiles – is also scattered with glass disks that reflect a constellation of sunspots onto the living room ceiling. Randomly interspersed among the pebbled areas are richly coloured jasper pebbles and small seashells. Finding them, like the ammonites at Radiant House, can happily occupy visiting children while adults talk and drink.